THE RISE TOUR ||| A Time to Rise Review + The Perfect Soundtrack

If you've followed my blog for any length of time, you've probably heard me shriek talk about my love for the Out of Time Series by Nadine Brandes.  Goodness, I wrote a post about why you should read it.

I had the privilege of reading A Time to Rise early to review it for you amazing people.  So...here are my thoughts... Disclaimer: If you haven't read A Time to Die and A Time to Speak, please don't read this post.  Instead, read my review for A Time to Die or why you must read this series. 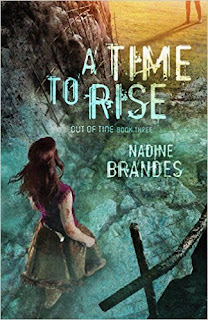 What more can you sacrifice than your life? Parvin Blackwater is dead. At least…that’s what the Council—and the world—thinks. But her sacrifice tore down part of the Wall long enough to stir up hope and rebellion in the people. Now she will rise again. Strong, free, and fearless. Parvin and Solomon must uncover the mysterious clues that Jude left behind in order to destroy the projected Wall once and for all. Meanwhile, the Council schemes to new levels of technology in its attempts to keep the people contained. Can a one-handed Radical and a scarred ex-Enforcer really bring shalom to the world? This is the concluding book in the Out of Time Series.

The moment I received the email with the ARC in it, I screamed.  I actually screamed and ran around my house telling my mom and sister all about it.  And then I started reading it...and well, you know, couldn't stop.

Once again, Nadine Brandes starts out with an epic first line.  The story picks up just a couple of hours after the cliffhanger end of A Time to Speak and doesn't stop until the very end.

Parvin comes back better than ever.  She has grown so much since she counted down what she thought was the last year of her life.  Her faith is so much stronger.  It's such a beautiful thing to read.  She's a little more sassy in this book, but I think it fits.  She's more comfortable with being herself.  *Shrugs* Some people may not like it but I do.  Maybe it's because she's so much like me.

Solomon is just as amazing as he's always been.  I fully support the Solovin ship.  Period.

Willow returns as well, but she has been utterly broken by the USE.

And then we come to Skelley Chase.  His craftiness is back, but just when you think you have him figured out...you don't.  Is he the real villain?  What does he actually want?  Whose side is he really on?

The plot was just as good as the other books.  It ended in a wonderful way with a "spiritual punch" and a killer last line.

Was I satisfied with the end to one of my favorite series?  Yes.  Yes, I was.  Many tears were shed and lots of fangirling went down.  Nadine finished this series out perfectly.

Nadine Brandes learned to write her alphabet with a fountain pen.
In Kindergarten.

Cool, right? She dealt with ink splotches before even knowing how to spell. She never decided to become a writer. Her brain simply classified it as a necessity to life -- like bathing, eating, and sleeping.

Nadine is an adventurer, fusing authentic faith with bold imagination. She writes stories about brave living, finding purpose, and other worlds soaked in imagination.

When she's not taste-testing a new chai or editing fantasy novels, Nadine is out traveling, finding new music, and pursuing active life.

Convinced to read it?  If you preorder it you can get some pretty cool swag items! 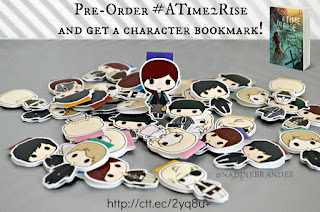 For those of you who don't know, I'm kind of obsessed with filmmaking.  I love filming, acting, and editing.  Basically all of it.  One of my favorite parts is picking the perfect soundtrack.  So when I found the perfect book trailer songs for each book in the Out of Time Series, I had to share.

A Time to Die - Android Automation by Audiomachine

A Time to Speak - Biostorm by Audiomachine

A Time to Rise - 25th Century by Audiomachine

Have you read any books in the Out of Time Series?  What did you think?  Are you as excited for A Time to Rise to release as I am?

5 Ways to Make A Character Different From You

I know I've fallen into the trap of making a character (or two) a carbon copy of myself.  There are multiple downsides to this, so here are a few helpful techniques I use to pull myself out of it when planning a character arc doesn't "cut it". 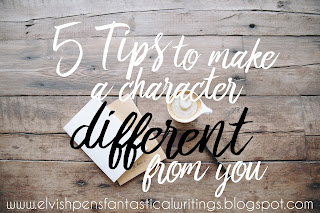 I know, this is a pretty boring tip that's pretty typical in a post like this.  I get it.  But it does help.  If anything, it's a stepping stone to the next tip.

3. When you write, "get into character".

People who act will know what this means.  If you aren't an actor, it means to get into the mindset of the character.  Become him, in a sense.  My acting teacher once told me that when I'm acting, 90% of my brain should be character's brain, and the other 10% should be my "actor brain" (or writer brain, in this case).  When you write, you want to become the POV character.  The previous 3 tips should help with this.

This can actually be a huge help.  Simply looking at the different personality types and deciding which one you want the character to be can help separate him from you.  One pretty helpful thing is that it can help you decide what the character would do if in  ________ situation.

5. Make the character be opposite your gender.

For some strange reason, I like writing from a guy's POV better than a girl's POV.  I think it's because it creates distance between the character and myself.  I put this as the last tip because it isn't always possible.  I mean, who would want to read a book with no girls?

What do you do to prevent your characters from being copies of you?  I would love to hear your thoughts!

The Wisteria Writer's Tag ||| In Which I Rant About My Writing

I was tagged by Michaila from Mic's Room!  Thank you so much! 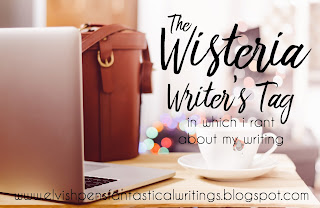 What is the name and what does she/he look like of your favored character?

Asher Watson is my favorite.  He's a sarcastic teenage boy who also happens to become a psychopath during the book.  So...yeah...

What would you describe your writing style as?

A huge mess, probably.  On a more serious note, I tend to write in first person present tense.  My biggest inspiration for this is Nadine Brandes.

How much writing do you complete in a week?

Plotting...on a note card, in a notebook, or in your brain?

I plot on random pieces of paper and try to find them when it comes time to write.  I warned you that I'm a mess.


It would be in a church and probably pretty small.  *shrugs* I guess I haven't thought too much about it.


I sketched some of my characters when I first started planning The Clockshifter.  Since I'm not an artist, I just traced pictures of actors and actresses.  Original, I know.

When did you start to write?


I started to like writing when I was in fourth grade.  I wrote a few little stories then.  I became serious about writing a little over two and a half years ago after watching The Hobbit: An Unexpected Journey and writing fanfiction for it.  (Even though my only knowledge of Middle-earth was from the movie and what my friends told me.)


Like a lot of writer origin stories, J.R.R. Tolkien.  (Well, technically Peter Jackson...but whatever.  It was Tolkien's idea first.)

What still inspires you?


My writer friends and books.  Shout-out to Katie Grace, Hosanna, Ashley, Zac, Nadine, Hannah, Wendy, Brianna, Strength of Atlantis, and Rosalie.  And thank you to all of you!  You inspire me too!

And finally, what would your published book look like, inside and out?

I have an obsession with book covers (both making them and the finished products), so this might be a long answer.  #sorrynotsorry.

**Disclaimer** I have not read any of the books mentioned, I am simply using their covers as examples.
I think it would be neat to have a watercolor cover, or something like that, sort of like the cover for Kingdom of Ash and Briars or have something that revolves around the text like Of Fire and Stars.  I also like 2-D type covers.  I'm not even sure if that's what they are called, but it's something like A Study in Charlotte.  Basically, the text must be spot on, along with a flawless backdrop like it is in Bright Smoke, Cold Fire.

I haven't really thought about the inside.

I hope I didn't bore you ranting about my writing.  This was a really fun tag to do!  I now nominate...

Here are your questions...

1. If you could have been the author of any published book, which one would you pick and why?
2. Do you ever daydream about your book at school/work?
3. When do you write the best?
4. What are your favorite writing snacks?
5. Is writing easier after reading something?
6. What does your dream book cover look like?
7. Does your writing style resemble that of your favorite author(s)?
8. Coffee or tea as writing fuel?
9. NaNoWriMo or Camp NaNoWriMo.
10. Share your favorite sentence from your WIP.

Please feel free to answer any of the questions in the comments!  I would love to hear about your writing!

Why do I write anyway?  What on earth possesses me to spend long hours tapping away at my keyboard avoiding carpel tunnel and writer's block?  Why do I pour my soul into my characters and cry when I ruin their lives? 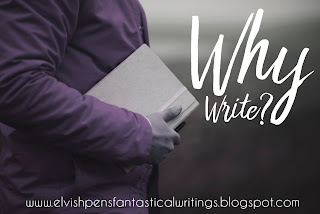 I can write about the stresses in my life through a story.

2. I can unleash my creativity.

I'm a creative person.  No, I don't have the budget to film an epic movie, so I write instead.

3. There's something magical about words.

You can create anything using different combinations of the same 26 letters.  Think about that.

4. I can take myself on journeys authors haven't thought of yet.

How many times have you thought of an idea and thought, "I wish authors would write about this instead of (insert topic here)."?  YOU can be the one to tell the story!  Write the story you want to read!

5. Eventually, I can share these stories and emotions with the rest of the world.

I can also see my hard work in paperback form.

How many non-Christians would pick up a book called "The Gospel 101"?  Probably none, but you never know.  Now, how many people would pick up a fiction book that doesn't hint at Christianity?  Many, many more.  Through fiction, you can disguise the Gospel and let God do the rest.  You can be the one to plant that seed.

Why do you write?  I would love to hear your thoughts!

If you haven't noticed, Elvish Pens, Fantastical Writings has a new design!  How do you like it?  Is there anything bugging you about it that I should try to fix?  Let me know in the comments!