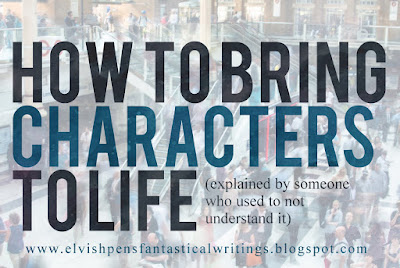 I'm a very cut and dry person. I like to be able to follow the 3 Step Formula To Perfect Results. I'm the person who doesn't understand how my English teacher figured out the author's thoughts on an issue from reading a fictional piece, but I understand how to get an answer in Algebra using PEMDAS.


For all of you like me, I'm sorry to break the news to you, but developing characters and making them come to life is NOT cut and dry because people aren't cut and dry. Why isn't it cut and dry? PEOPLE ARE COMPLEX. We are intelligent creatures made in the image of God. We are fallen creatures born with a sin nature--a natural desire to serve ourselves. On top of this, no two people are exactly the same. Everyone is different, and that is beautiful. But...that kind of makes it complicated for writers. Unfortunately here isn't a worksheet or Myers-Briggs site that will magically help you make awesome characters. However, I'm here to try to shed a little bit of light on this subject for the rest of us who struggle with understanding abstract concepts.

1. Figure out how he/she talks and thinks.

I know that this isn't a super deep thing to start with, but it's pretty important as you discover a character. We have to start from the outside in. Think of a movie. One thing that sets movies apart from books is that we only see how a character acts and reacts, we don't get to see their thoughts and emotions. The impression we get of them comes from the actors' portrayals. This brings me back to finding the character's voice.

Is he he sarcastic? Does he tell jokes a lot? Does he rarely speak, but when he does, it's powerful?

Now, move on to how does he think? Some people talk to themselves...I think to myself. I literally have thoughts that go through my head. That's part of my voice.

So...how does the character think? Does he say one thing but think something completely opposite? Can he speak smoothly while internally freaking out? What comments does she make in her head?

For examples on all of this, just look at the world around you. Gather ideas from conversations at a coffee shop, from those awkward family reunions, or even from that one family in Walmart with the kids that are constantly fighting. Also, look into yourself. How do you think? Do you make sarcastic comments to yourself as you talk to others? Can you be completely cool and totally freaking out at the same time?

In a lot of books, the main way a character grows is by facing his fears head on and conquering through them. That's what makes a hero a hero. Using the character's voice as a guide, (and probably your story idea. This is one concrete thing you can do.) decide what his/her greatest fear is. If the character is quiet and reserved but always has great comments playing out in her head, maybe she's terrified of being unwanted. Find all of the masks this character hides behind. Maybe the character says his greatest fear of snakes, but if he goes deeper, he discovers it's actually of dying. Right now, you don't have to figure out the backstory of why she's terrified of X, just figure out the what. (And some fears just come naturally with who you are as a person. My greatest fear is death, but that came literally from me just being alive. I didn't have a near-death experience as a baby to make this my greatest fear; it's just because that's the way I am. Also, this one central fear stems into a variety of other fears like fear of heights or fear of dangerous-looking things. I'm just more of a timid person because of this.) Also, a character can have a couple of deep, great fears.

3. Find the walls in his/her heart.

Everyone has walls built up for various reasons. Find those walls. Sometimes it takes writing an entire draft to discover these, but they're crucial to the story because they affect every interaction that character has. Does this character suddenly shut down whenever she talks to her dad because he's broken and broken her heart numerous times? Who does he open up to? How long does it take for him to open up? Does he wear his heart on his sleeve?

What does he want more than anything in this world? To be loved? To be happy? To find something more in life? This is the time to look to the Big Things, not just the "goals" everyone hears writers talking about. Goals are temporary, but these are desires etched into the character's heart.

I also want to address one thing here about antagonists. EVERYONE. I repeat, EVERYONE has a hole in his heart. Everyone. And everyone tries to fill it with something. People try and try and try. I don't care if you're a saint or a super villain, everyone has a hole. You may think your villain just wants power power power, but WHY does he want power? Again, this isn't a time for backstory, this is why. What is the hole he keeps trying to fill? Does he think power will make him happy? Does he think having power will finally make him feel loved? Villains aren't mindless evil robots.

Stepping aside from writing for a second, there is only one thing that can fill this hole. One. Thing. Nothing in this life will satisfy us. Not money, other people, our reputations, fame, or whatever else. The only thing that can fill the un-fillable hole is Jesus Christ, the Savior of the World. Why else would every single person long for something greater than this life? Why is the material world never enough? Because we were MADE FOR MORE. However, because of the Fall in the Garden of Eden, we can't become more and we will never be able to become more. That's why God sent His Son, Jesus, to take our place on the cross to atone for OUR SINS. Everything GONE. Once we accept the gift of Jesus's sacrifice, we are CHILDREN OF GOD. God fills that "love" hole with love. He fills the "happiness" hole with joy. HE FILLS THE HOLES.

5. Figure out appearance, likes, dislikes, hobbies, occupation, and all the surface level stuff.

This is the probably the best step for all of your worksheet people. This is the basic, cut and dry stuff like eye color, height, hobbies, occupation, and favorite movie. This is the stuff you learn when you first meet someone. Make sure to keep in mind all of the previous steps. It would be pretty contradictory to make the person who's terrified of snakes a zookeeper assigned to the reptile room. (Unless that's the whole point of the story. If that's the case, have at it.)

6. Figure out the character's backstory.

Okay, now that you know this character's heart and a little bit of surface level stuff, it's time to figure out what happened to them before the story. I put this step after the surface level stuff because that surface level stuff affects this step. How did she get to where she is now? I feel like this is pretty self explanatory, and there are plenty of other resources on this, so I won't go too into detail.

Remember, this is just the first draft, so it's okay to keep discovering more and more about your characters as you go. You're "becoming their friends" and "getting to know them" as you see them respond to different events and characters. Watch them grow and see where it takes you. If you have to adjust your plot or planned outcome, so be it. Let the characters remain true to themselves, otherwise the story will feel forced.


How do you develop your characters? Do you have any tips to add to this? Who are some of your favorite characters? Which villains do you think are well written?
6 comments: