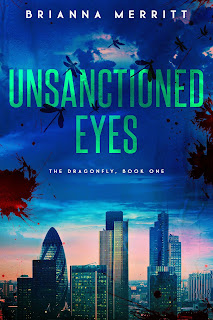 Her death was just the beginning.
Quinn Rogers doesn’t exist. There are no records of her name. Her DNA has no match. She is a ghost. A phantom killer no one can trace. The perfect assassin. Or so she thinks.
At the top of her game, Quinn’s no longer looking over her shoulder. Her master will protect her, save her, like he always has. But there are forces at work neither of them suspect.
Can Quinn find the truth in a world of lies? Or will her unsanctioned past catch up to her in the end?


Step aside, cliche thrillers because The Dragonfly series is coming to town!  Brianna's incredible writing skills kidnapped my mind and threw it into the world of assassins, terrorists, and secret agents.

I fell in love with Brianna's characters, despite their murderous tendencies.  Why?  They are real, broke people.  They work for (I don't want to tell you too much) who will kill them if they don't do as he says.  This trains them to dim their consciences.  But as the story goes on, stuff happens that reawakens those thoughts that what they are doing is bad.  However, there is still survival stuff and characters interactions that get in their way and make them completely human.

Also, there is Nathan who is an adorable human.  (He's not an assassin, but he's just precious.)  Can we talk about the fact that he grows so much over the story, and the main plot isn't even about him?!


Unsanctioned Eyes takes place all over the world: London, Afghanistan, and other places.  I've never been to any of those places before, but after reading this book, I feel like I have.


Masterfully written.  I'm not going to say any more on this.


There was quite a bit of language, but none was "super awful".  (It's not every other sentence either.)  It fits with the characters.  Obviously, there was quite a bit of violence.  The assassins aren't super moral people, so they don't do the most moral things.  But this is NOT EVIL BEING GLORIFIED.  The characters start to change by the end of the story.  Quinn is presented with the idea of God and His saving grace.  The author is not condoning the actions of her characters.  I just wanted to make that very clear.


Basically, this is a fantastic book for people who enjoy thrillers like the Jason Bourne series, but are tired of evil being glorified.  I recommend this book to older teens and above because of some of the content.  5/5 stars!  This book releases TOMORROW so remember to get a copy!


*Disclaimer* I received a free copy of this book in exchange for my honest review.

Note: Due to technical difficulties, you won't be able to preorder this book.  However you will be able to buy it on Amazon TOMORROW.

Brianna grew up in a small town in Oklahoma learning the language of the wind and trying to survive the heat of summer. She fell in love with all things literary at an early age and the journey from reader to writer followed. With the help of One Year Adventure Novel, she finished her first novel in 2012 and hasn’t been able to stop creating new worlds and adventures since.

She lives in Virginia with her family and spoiled Dalmatian, Valentine.

Also, here's an unofficial book trailer I made: