End of the Year Wrap-Up + Survey 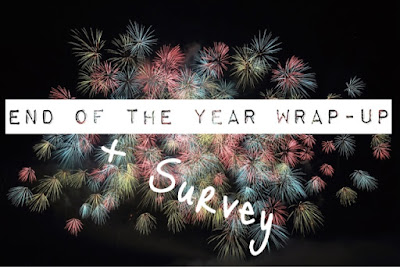 January:
- 1st anniversary of being a writer.

February:
- The King's Scrolls by Jaye L. Knight was released!

April:
- Read A Time to Die by Nadine Brandes for the first time!
- I finished the 1st draft of The Clockshifter!

June:
- 1st Year Blogiversary
- I went on my first mission trip!
- I had the privilege of interviewing the awesome Nadine Brandes!

July:
- I went on vacation to Washington D.C. and other places.
- I allowed comments on my blog!
- Half-Blood by Jaye L. Knight was released!

September:
- I started a blog with a group of Christian girls.

October:
- A Time to Speak by Nadine Brandes was released!

November:
- I began writing a new book!
- NaNoWriMo
- I send The Clockshifter out to beta readers.

December:
- I traveled to visit my awesome writing buddy, Katie Grace.
- I got a lot of books for Christmas.  :D
- I rewatched all of the Star Wars movies and joined the fandom.  I also saw the new one!

(This is sort of the "New Years resolution" part of the post.)

1. I really want to try to read 100 books.  (It helps that I have had at least 15 book recomendations today.)
2. I want to completely finish The Clockshifter.
3. Attend Realm Makers.
4. Blog more. (If you have any requests, please either put them in the comments or fill out the survey.)
5. Spend more time writing.

I have read quite a few books since doing my last review.  Instead of writing a detailed review of each one, I will summarize my thoughts and put it with a starred rating.

1. Goddess Tithe by Anne Elisabeth Stengl - 4/5 Stars - Awesome little adventure.  It took me a little while to get into it, though.

2. Orphan's Song by Gillian Bronte Adams - 3/5 Stars - The only parts I really got into were the parts with Ky.  I really liked the world building of this book.

3. Do You Take this Quest? by Kendra E. Ardnek - 4/5 Stars - A quick read that does a great job of continuing the first book.  It was a little confusing keeping all of the names straight.

4. My Kingdom for a Quest by Kendra E. Ardnek - 3/5 Stars - It took me a little longer to get into this one, but it was good towards the end!

5. The Ankulen by Kendra E. Ardnek - 5/5 Stars - This is one of my favorite books by Kendra.  It is so imaginative with her signature sense of humor.  :D How could I not love this book?

7. Implant by J. Grace Pennington - 4/5 Stars - This book kept me interested the entire time.  I did not see some of it coming.  The end confused me.  I'm not sure exactly what happened. Spoiler: The end wasn't clear of whether what he had actually time traveled or not.  What happened to him after?  Did he die of cancer?  If you have some insight on this, please let me know in the comments!  End spoiler.

8. Across the Stars by Morgan Elizabeth Huneke - 3/5 Stars - I wasn't a huge fan of this book.  It was unrealistic, and some parts I skimmed over.  It is a great book for younger kids.  I love how she ties in American history into it!  If you have younger children, I highly recommend they read this!

9. Creighton Hill by Morgan Elizabeth Huneke - 4/5 Stars - This.  Is.  Awesome.  This book is like Narnia, but completely original at the same time.  The character development is fantastic.  :D I love it.

10. The Crossways by Morgan Elizabeth Huneke - 4/5 Stars - This book is a great sequel to Creighton Hill!  It carries the story beautifully!  My only problem is I expected it to be harder to get the Redona.
2 comments:

Merry Christmas!  Can you believe that it is only a few days until Christmas?  As a Christmas gift to you, one of my favorite authors, Kendra E. Ardnek is offering most of her books for FREE on Kindle! 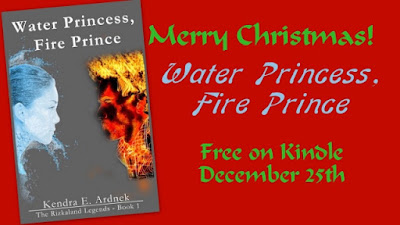 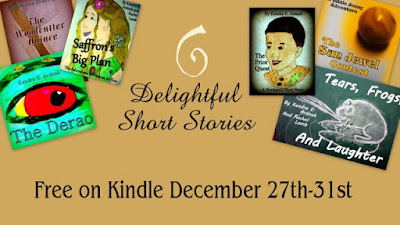 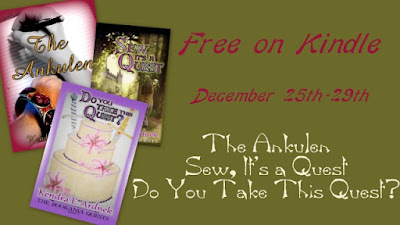 December 25th - 29th
Sew, It's A Quest
Do You Take This Quest
The Ankulen

How to Avoid Cliches in Christmas Stories

Hello my dear readers!  It is finally the Christmas season!  It is perfectly okay to burst into a random Christmas carol and sing along to songs in Walmart...not saying I do this or anything...

All that I have been watching have had the same plot, more or less.  They are cliche Christmas movies.  You know, the one where one big city character needs to get his or her life together, is sent to some small middle-of-nowhere town.  There, this character meets a person of the opposite gender, changes his or her life, and fall in love.  There is sometimes some sort of love triangle too.  Typically they end on Christmas eve with a proposal and/or kiss.  *sigh* How romantic...except for the fact that they are all the same. 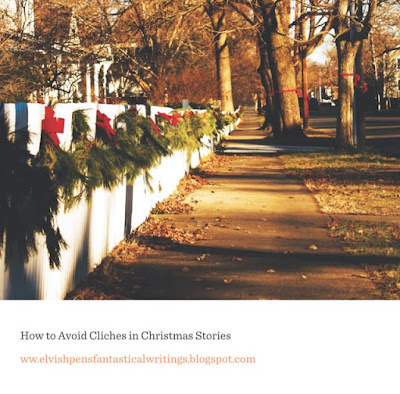 Here are some tips on how to avoid the cliche Christmas Romance Story.

1. Make the point of the movie something other than romance.  I like a nice (appropriate) love story just as much as the next girl, however, it is getting a little old in Christmas movies.

2. Avoid the guy-on-wrong-path-changes-his-life cliche.  How about a book where everyone is following God?  Maybe the guy is a criminal who changes his life.  How about he go to jail in the end for a change?  I watched a Christmas movie recently that had this happen and it was a nice change.

3. How about an adventure?  Christmas movies are usually chick flicks.  How about a Christmas adventure movie?  That would be very fun!

4. Keep Christ in Christmas.  A lot of Christmas movies are about Christmas and Santa.  Sometimes God is in it too, but the center isn't around Christ being born to die on the cross.

I did the first Beautiful Books link - up hosted by Cait and Sky - before NaNoWriMo began about To Be Awake.  I haven't yet finished To Be Awake so I will be doing this on The Clockshifter.  This is so very close to being done!  It has a couple of last minute touches and then it will go out to my awesome beta readers!  (If you would like to be a beta reader, you still have today to sign up!) 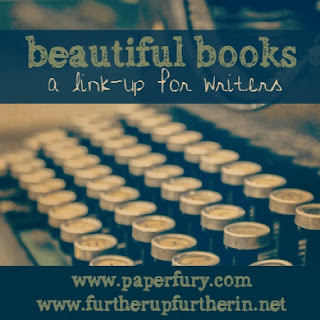 Deadlines cause me to have inspiration, particularly NaNoWriMo.

First, I read through it, and fix some little things to make it bearable for me to do anything major too.  Second, I rewrite every single sentence until it is even more perfect.  Third, I edit some more, doing more line edits and things, and fixing any flaws I see.  Fourth, once I have perfected as much as I can, I will send it to beta readers.

That's basically what I have figured out after a year of trial and error.  :)

My characters definitely need the most work.  I feel like they have little to no personality.  It could just be me, though, because I'm a total perfectionist when I come to my writing.

:D The wibbly wobbly timey wimey...stuff.  (Though in my book this term is rephrased as "time travel stuff.")

Lyric - An introvert who notices everything and is also secretly very opinionated.  When she gets used to being around someone she becomes less shy.

I'm going to change this question a bit since I already answered this above.  After beta readers, I am planning on making suggested changes, doing a major line edit, and then start querying publishers and literary agents!

Querying.  At one point I considered self publishing this book, but I realized it wasn't near ready and it has always been my dream to have it traditionally published.  I highly respect Indie authors, however.

This was it, the very last time my Learning Chip would be updated. I lowered myself down into a lounge chair in the center of the blindingly white room.  A florescent light bulb on the ceiling silhouetted the woman with perfect blonde hair I had always remembered.
"Are you comfortable?" she said. Butter. Her voice still reminded me of butter.
"Yes, ma'am." As much as one could be in that room. It had always made me nervous. I readjusted my position.  The paper covering crinkled.
"This may pinch for a second.” She held up a thin black wire. "Turn your head for me."
I turned away from her and pulled back my dull brown hair, revealing a small square bald spot filled with a black chip. She connected a wire to it, a small pinch ensued. I bit my lip.
"All done, Miss Valvo.” She took the sleek white headphones from the table next to my chair and handed them to me. “What music would you like to listen to?"
"Soft, calming music, I think." I definitely needed something to calm myself down.
"Okay, put these on." She handed me the headphones and flipped a switch on the table.
Sweet music filled my ears. I closed my eyes.
"A little review," the smooth voice of a man said. "Who is the ruler of the Confederation of Facta-est?"
"Vladimir Fang," I said. My tense muscles began to relax.  My body tingled. Then all feeling disappeared.  When this had first happened to me, I freaked out; but that was ten years ago.
The blurry image of a man appeared in the darkness of my mind.  No matter how hard I strained my eyes, they would not focus on them.  Probably a flaw in the computer system.
“How many Units are there?”
Did he have to ask such easy questions? That came in an Update about eight years ago!  I kept my thoughts to myself. Arguing would do no good.  “Seven.”
“Good. Now on to something a bit harder,” the computerized man said.
Finally.

What are your 2016 writing plans?  How is your current writing/editing going?  Let me know in the comments!
4 comments:

I am very excited and slightly terrified to share with you that I am ready to find beta readers for my book, The Clockshifter!  *Throws confetti in the air*  It has been a long process, but it's finally time!

Lyric Valvo has lived in the Building her entire life.  That changes when she is tossed back in time and recruited into the military.  Stuck in the past, she learns of a prophecy given by someone called the Clockshifter.  This person has more of a connection to the future than she thought, and his agenda is less than friendly.

If you have any questions, please feel free to leave a comment below!  Sign-ups should be open for a week or so.