The King's Scrolls, the second book in the Ilyon Chronicles, has been released!  Isn't this so exciting?  I have the privilage of participating in the Blog Tour for it! 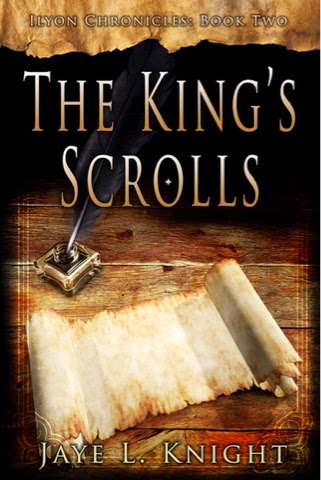 About the Book: Following the harrowing events that brought them to Landale Forest, Jace and Kyrin have settled comfortably into their new lives and the mission of protecting those under the emperor’s persecution. The fast approach of winter brings with it the anticipation of a quiet few months ahead. That is until the arrival of four mysterious, dragon-riding cretes who seek aid in a mission of great importance—not only to their own people, butto all followers of Elôm.
Hidden in the vast mining valley north of Valcré, a faithful crete has spent years sharing his knowledge with the destitute miners and their families and is known to possess what may be Arcacia’s last surviving copies of the King’s Scrolls—the Word of Elôm. Joining the cretes, those in Landale must find the creteteacher and bring him to safety, but it is a race against time. Should Daican’s men find him first, execution and the destruction of the Scrolls is certain.
When disaster strikes, all seems lost. Could Elôm have a plan even in the enemy’s triumph?

To start, I will talk about the characters.  In Resistance, Jace was my favorite.  He was so deep and lovable.  I just wanted to give him a big hug.  I love him even more in this book!  He is so sweet towards Kyrin and admits his fears like a great man would.  Kyrin was the main point of view character in this book.  She is such a real character and I relate to her so much.  I really love getting to see more of Liam and Marcus!  I am so excited to get to know them better as the series goes on!
I remember when I was reading the middle of the book, I had no idea what would happen next.  I thought that it was over.  I didn't see how the situation could get any worse.  Jaye, you are amazing with plots!  I have noticed this about her other books.  Around halfway through the book, it is the lowest point.
Please, please, please read this book!
Just as a note, I recieved a copy of this book from the author in exchange for an honest review.  Thanks, Jaye!

Jaye L. Knight is a homeschool graduated indie author with a passion for writing Christian fantasy and clean new adult fiction. Armed with an active imagination and love for adventure, Jaye weaves stories of truth, faith, and courage with the message that even in the deepest darkness, God’s love shines as a light to offer hope. She has been penning stories since the age of eight and resides in the Northwoods of Wisconsin.

I also have the amazing opportunity to interview her here!  And here it is:

Do you have a favorite book in the Bible?  If so, what is it?
I have so many books I like to read in, but if I had to pick one, I think I’d say Psalms. I particularly love chapter 119. I think I’ve read through Psalms more than any other book in the Bible, and every time I find more to highlight or underline.
What is your favorite part about being published?
Probably getting to share my work with everyone. It’s terribly scary, but also very exciting. Writing is a very solitary endeavor, but once you publish, you get to involve many more people. As hard as it is to get criticism sometimes, it’s worth the risk when you hear from readers who love your work. There’s nothing like it. It almost makes me cry (good tears) sometimes to read the wonderful reviews and messages I get. Even after eight years of publishing, it’s still incredible to see how God is using the talents He’s given me.
If you could make any character come to life for one day, who would it be?
Ooh, a tough question. One of my own characters? Well, I’d have to say Jace. I mean, how could I not? It’s Jace!
As for a character from a different work of fiction . . . uh, that’s even tougher. Aragorn. Yeah. Definitely Aragorn . . . or Kien from Books of the Infinite. But then I might fall in love with him and he’s already in love with Ela. :( Lol! ;)
If you could pick any song to be the theme song of The King's Scrolls, what would it be?
I listen to a lot of instrumental music while writing and Triumph and Loss by Audiomachine was one of the main songs I listened to for TKS. It really fits the overall mood and feel of the story. If I were to pick a song with lyrics, Even If by Kutless would be really good. It really fits the theme and message behind the book.

If you could pick any book to be made into a movie, what would it be?
Books of the Infinite. *nods enthusiastically* I would love to see that. It would be amazing. :)

Thank you so much for coming over to my little corner of the Internet, Jaye!

There are a few other little goodies that go along with this too.  :)

Giveaway
Share in the excitement of the release and enter to win a themed Epic Winter giveaway! Prize pack includes an autographed copy of The King’s Scrolls, a CD by Future World Music (some of Jaye’s favorite writing music), a dragon bookmark, a stone hawk pendant (much like the ones mentioned in the book), and a few packages of Twining’s Winter Spice tea to sip while you read! (Giveaway is open to US residents only. Cannot be shipped internationally.) 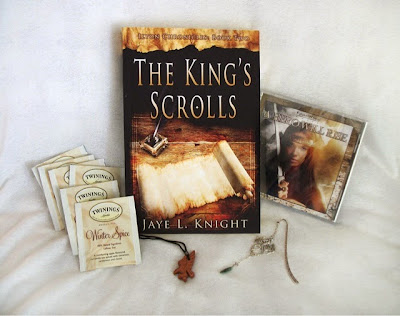 Check out this awesome quote image thing that Jaye made for The King's Scrolls! 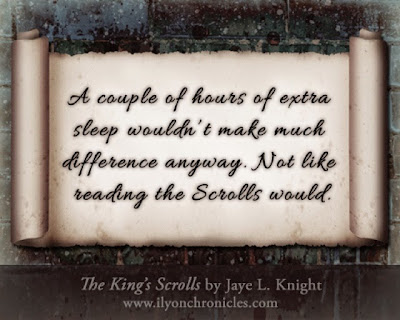 This is all so exciting! :D

You can buy The King's Scrolls on Amazon and get an autographed copy here!

Make sure and visit the other blog tour posts for what is left!  You can see all of the previous posts by going here: http://jayelknight.blogspot.com/2015/02/the-kings-scrolls-has-arrived.html
Tuesday, February 24
• Q&A Session at Ilyon Chronicles - Behind the Scenes
• Review at Shire Reviews
• Review and Author Interview at The Pen of a Ready Writer
• Character Interview (Leetra) at A Writer’s Faith
Wednesday, February 25
• Tour Conclusion at Jaye L. Knight 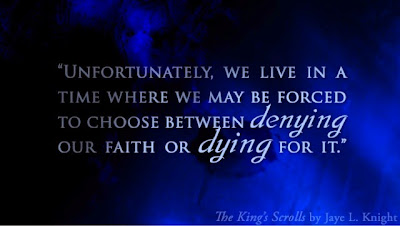